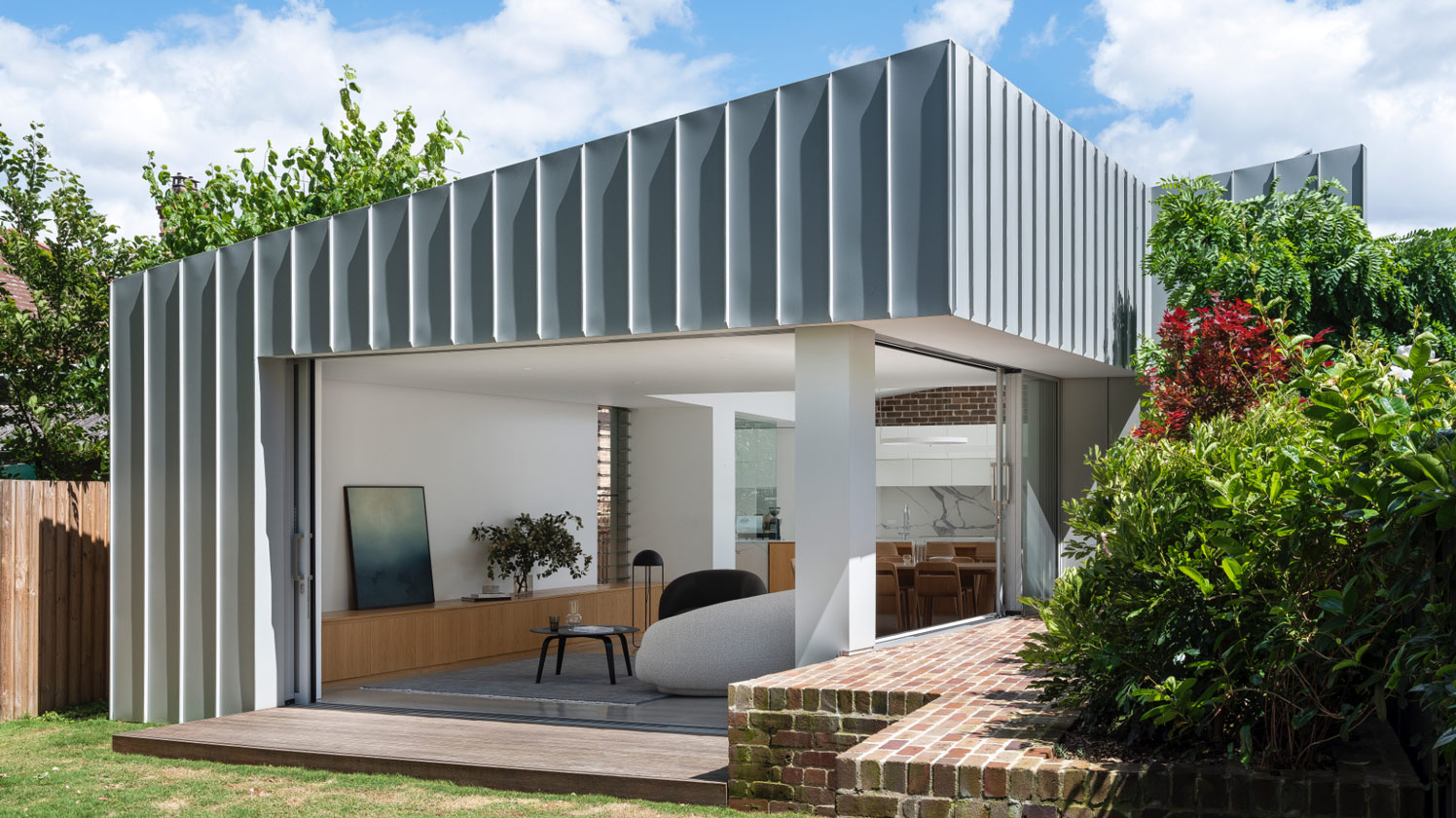 Our intention was to activate the entire site by creating a series of connected spaces inside and outside of the building that respond to the physical conditions of the site and programme. We wanted to resist the urge to simply open the living area to the rear yard when there were viable opportunities for north facing living and entertaining spaces along the side boundary. 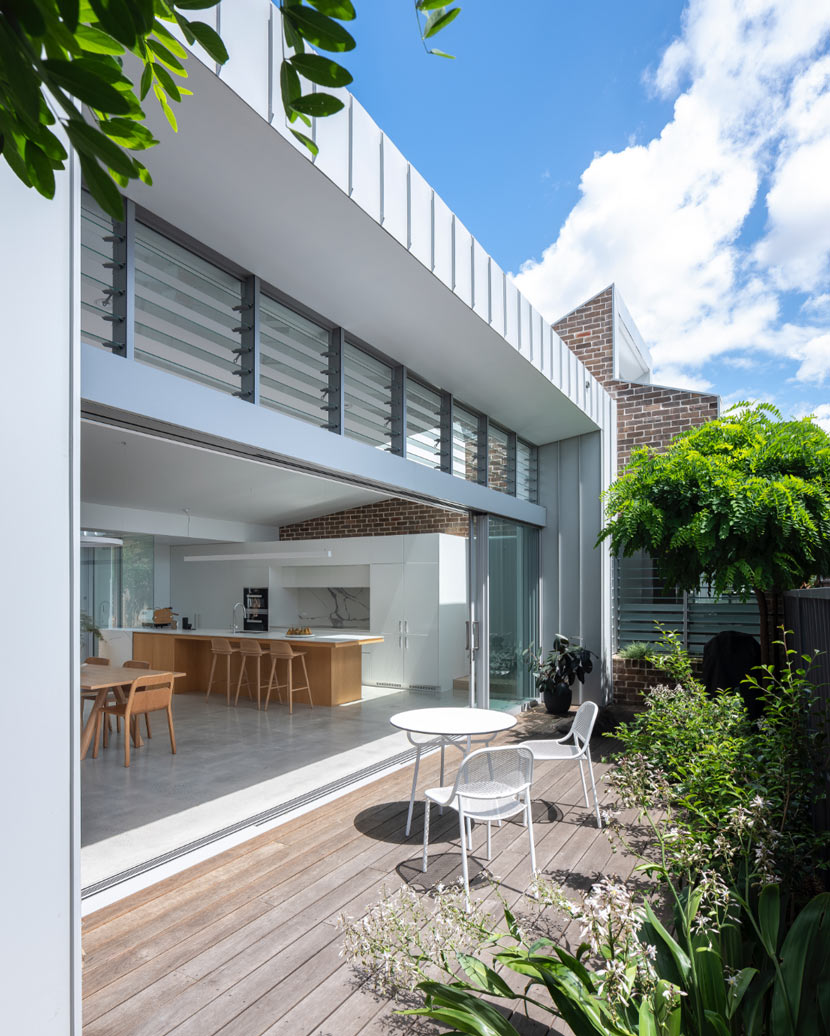 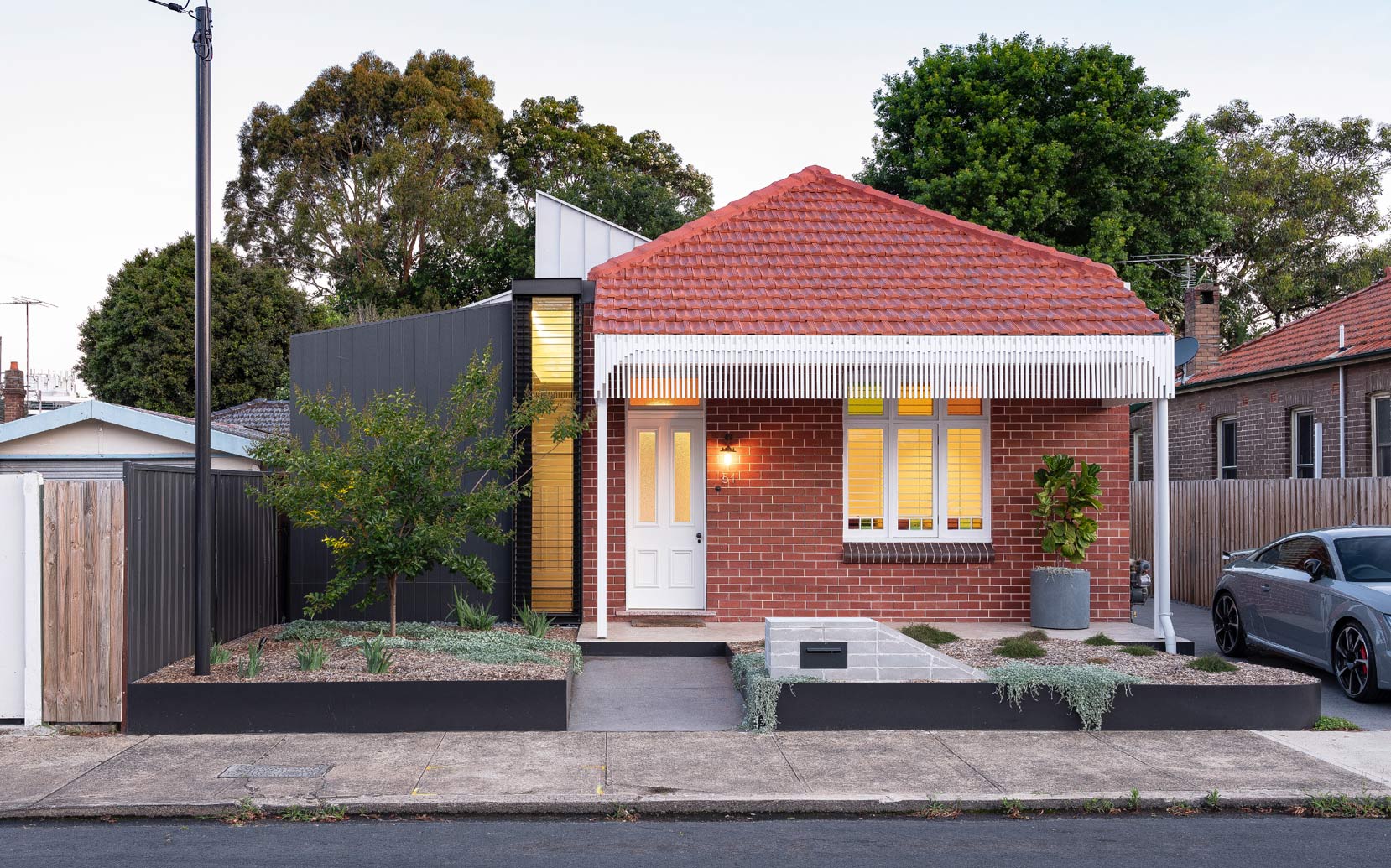 Through material treatment and window placement, the threshold is exaggerated and a stark contrast between the new and old is formed.

The client a young couple purchased the dilapidated property with the intention of restoring the existing building and converting it into a modern living sanctuary.

The site consisted of an existing brick workers cottage that had undergone several distasteful alterations over its life. One of which consisted of an addition that had been tacked onto the side of the original building resulting in a bulky and un proportional street facing elevation. This formed the premise of the brief which was initially; restore the original brick building to its original proportion as viewed from the street, re-configure the layout of the existing building to suit a young modern family and to create a rear addition to accommodate a new large living, dining and kitchen space suitable for entertaining. 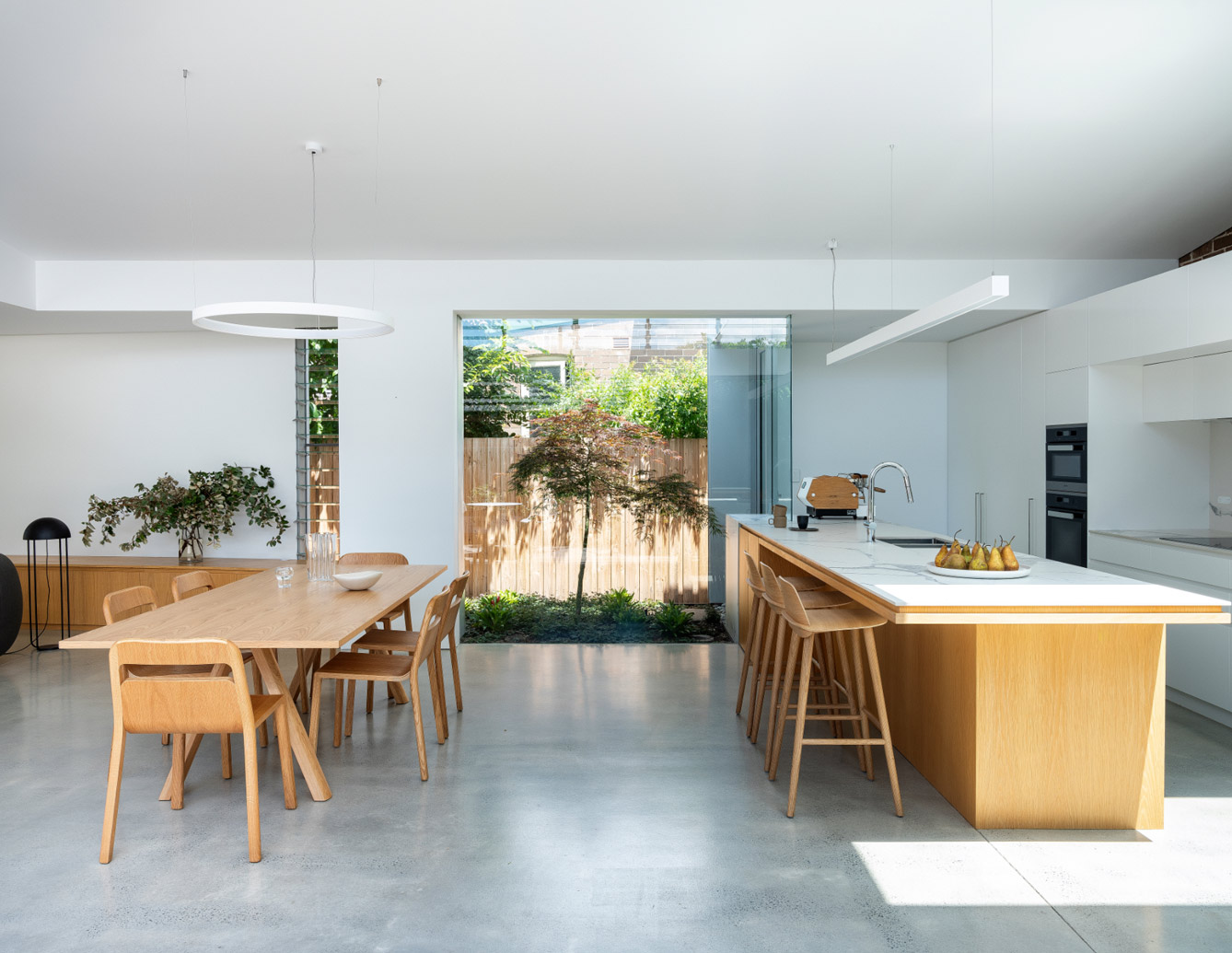 In plan negative and positive space is used as a tool to creates a series of courtyards or usable spaces around the perimeter of the living addition and inside/outside spaces within the living. 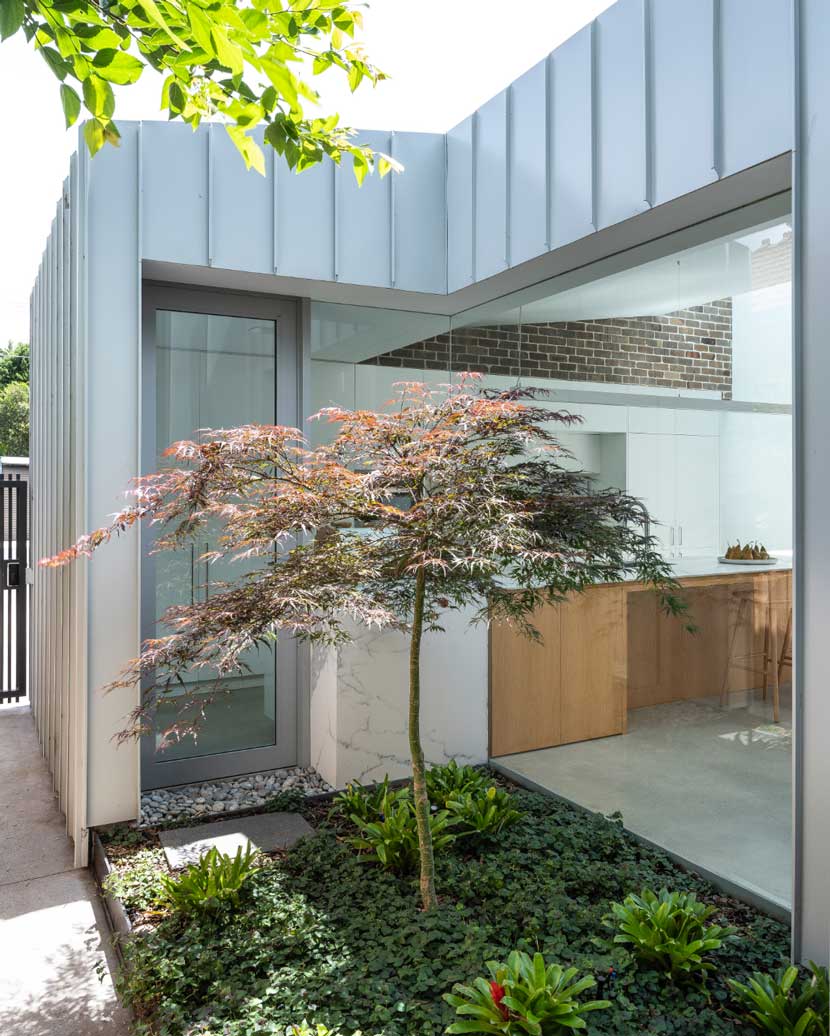 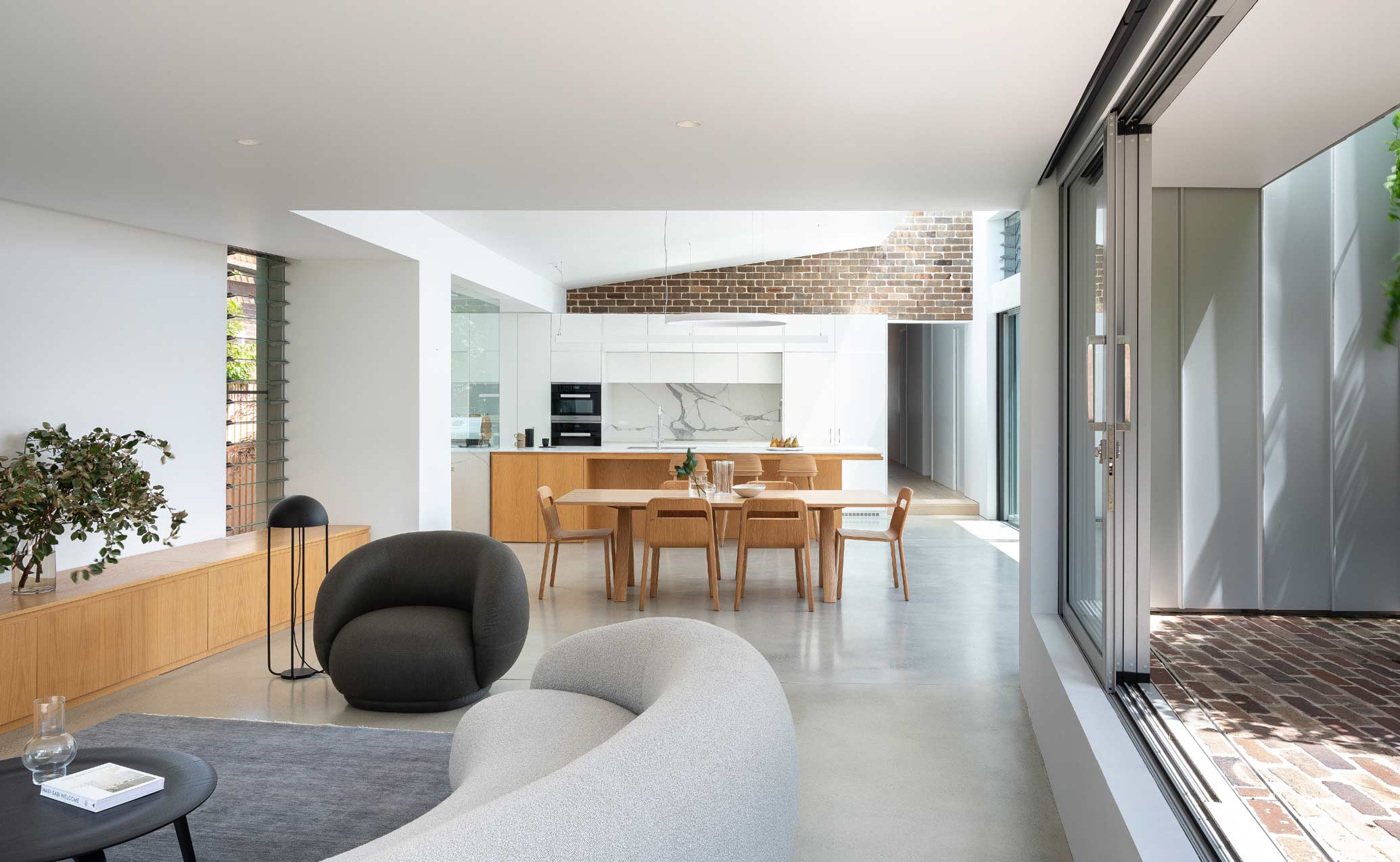 While the living/kitchen and dining area would generally be considered as open plan we wanted to subtly define these spaces giving each space its own spatial characteristic or purpose while maintaining the overall connection. The rotating of the living/lounge area slightly away from the other spaces resulted in a slightly more discreet space for sitting and relaxing and entry into the yard.

Dealing visually with the junction between the new and old is always a challenge in contemporary alts and adds. In this case instead of playing down this interaction we envisaged a more sculptural solution. The existing building is cut physically at a suitable line then reconstructed using recycled bricks from the site to form a large sculptural wall that exaggerates a contemporary vernacular form. This form sets the line of a new roof that creates large voids with celestial windows over the hall and bathroom.

From the living and entertaining areas the wall acts as a dramatic backdrop that is somewhat symbolic of its urban context and demolished remnants of site. A large skylight has been located at this junction and carefully detailed so it’s glass appears to be floating into the brick wall, this breaks down the threshold between the old and the new and sets up views of the walls form from the internal spaces. 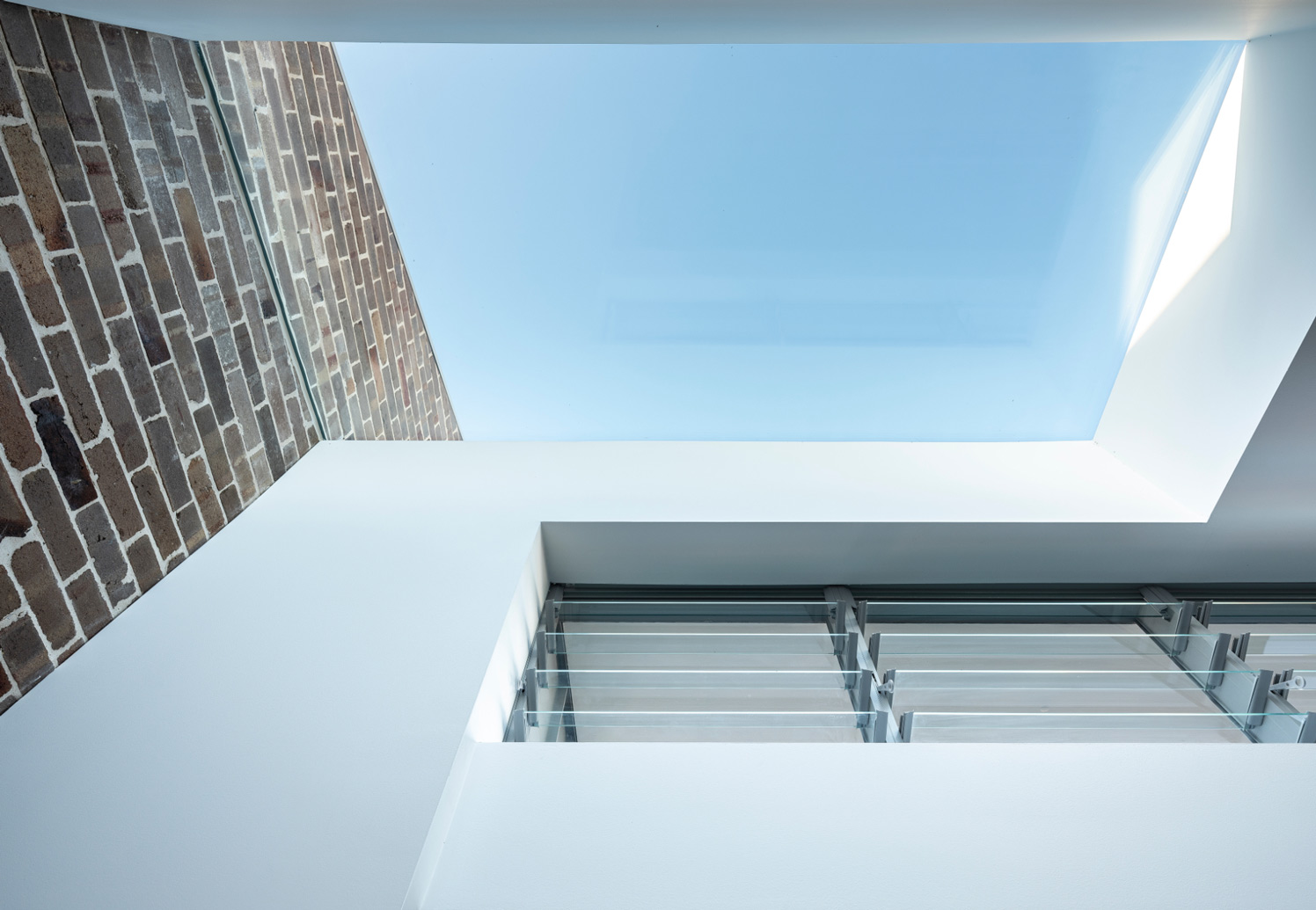 When you open the windows at the top of the hallway void you immediately feel the air brush past you as it is sucked up through the void. 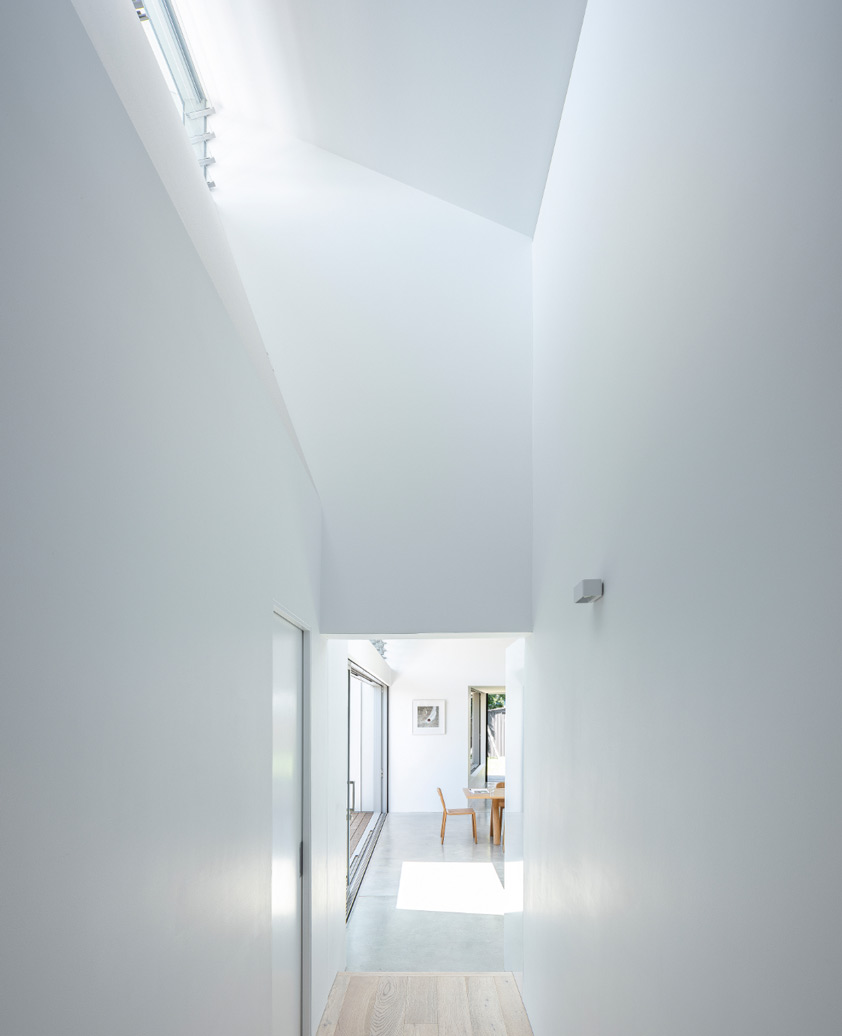